In some communities, EV adoption has spread like wildfire which may be putting transformers at risk. One of our municipal utility clients is simultaneously very lucky, unlucky and lucky again. They have one of the highest EVs per capita ownership rates in Massachusetts and a stunning 70% of them are Teslas. The first piece of good news is that EVs produce substantial revenue for the utility. The bad news is that without peak load shifting, the capacity costs would be ugly and would eat up more than all of the revenue generated from increased kWh sales. The second bit of good news is that they use Sagewell’s Bring Your Own Charger® (BYOC) to shift that peak load to off-peak hours. But, this story is not about BYOC. It is about what happens if a utility does not manage EV peak load and how it can be a more unhappy story than just bad utility economics.

The data is beginning to suggest that EV load can potentially damage a distribution network by overloading transformers, wearing them out prematurely and possibly even creating fire hazards. This part of the story is particularly relevant to utilities in California where the consequences of fires can be extraordinarily harmful to people, property and to utilities.

Our work with AMI meter data has led us to a promising method for identifying potential transformer overload risks and how to potentially reduce those risks.

The key is proactively identifying parts of the network that are at risk of failing (e.g. transformers) due to overloading and then identifying the potential causes of the overload. The cumulative overloading impacts of large loads represent risks that should be analyzed by utilities, particularly those with larger concentrations of those end uses, and especially in California. The indications are that these large loads may represent a larger risk than understood in the industry. While there are many potential causes for increased transformer overload risks, we’ve found a significant amount of the risk comes from three sources: electric vehicles, bitcoin and other blockchain “mining”, and “indoor agriculture” which has become increasingly popular as it has become legal in many states.

Our analysis of EV charging indicates that on average, about 30% of EV owners charge on any given day. However, there is significant variability from day to day. A recent analysis using data from summer 2019 showed between 15% and 50% of vehicles charged each day (as shown in the chart below). An area with a high concentration of EVs may be capable of handling the “average day” without problems , but what if 50% or more of the EV’s charge simultaneously on a peak day? Could that lead to meaningful overloading of circuits or transformers? The answer depends on the utility: some have built their networks with extra capacity and won’t have issues while it can be a significant challenge for those with more constrained networks. The risks are particularly high in California because of the large number of Teslas that can charge at 11.5 kW. 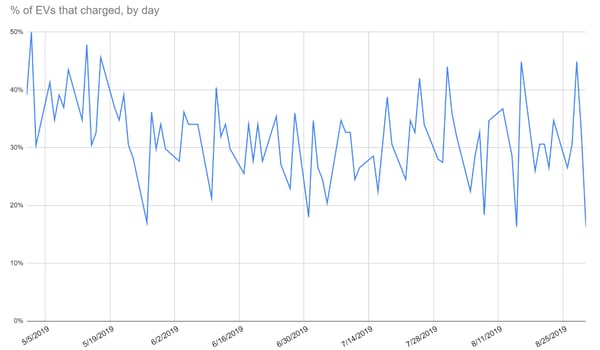 In addition, we have analyzed the differences between EVs enrolled in utility load management programs versus electric vehicles “in the wild.” The short summary is that EVs that are not participating in utility load control programs appear to have different charging profiles from those that are part of the programs and can pose larger risks than are understood. Since smart charger EV load control programs typically enroll just 5% to 10% of total EVs in a territory, it is crucial to use AMI data to analyze non-participants as well. The reality of EV charging behavior can be very different than what is assumed. Fortunately, load disaggregation and artificial intelligence analysis methods, such as those employed in Sagewell’s SageSightSM AMI meter data analytics software, can be used to identify where those EVs charge in the distribution network. Sagewell’s EVFinderSM algorithm has been crucial in helping us identify where the network bottlenecks may exist. In the process, we have run into various other surprises in addition to realizing just how variable the probability of charging is during any given day or hour. For example, sometimes it may be just one or two EVs that are the primary sources of risk to a specific transformer and target marketing a load management program to that EV owner can reduce a transformer failure risk.

Reducing risks to the distribution network by analyzing AMI meter data can reduce the risk of outages, expensive network component replacements and keep happier customers. This is especially true for those EV drivers who expect their cars to be fully charged in the morning and don’t want to be looking at an empty battery indicator and a utility truck replacing the transformer in front of their house.